In this documentation you will master the camera tools and all the functionalities to make it work exactly as you want and create an impression for the client since the very first view!
First, we need to understand that hauzd Engine will create the REAL camera object INSIDE the scene so you don´t have to set or create things such as "Physical Cameras" inside 3ds Max.
Hauzd will use the information of certain objects to create this camera;
This objects are cam_ and camLoc_
cam_ is for the camera used in the Building scene, Exterior, or Masterplans
camLoc_ is for the camera used in the Small Scale Map screen that shows the Points of Interest
On Interior Scenes, the camera is set up automatically without the need of these elements, and it will do so according to your 3d elements, it will do its best to place the camera to make all your scene objects visible
The cam objects are NURBS placed inside your scene, hauzd Engine will use the size and shape of the NURBS to create the camera and define the movement li mits.
Understanding this, the 2 types of cameras most commonly used, are the cylinder (it creates a seamless orbit around the building) and the planar (it resembles an aerial view)
You can download these 2 types of objects using the following links:
Cylinder Type Camera
Project Using Cylinder Cam:  https://sample.hauzd.com/
Download 3D Elements:  https://downloads.hauzd.com/resources/CylinderCam.zip
Planar Aerial View Camera
Project Using Planar Cam:  https://oceanasurin.hauzd.com/
Download 3D Elements:  https://downloads.hauzd.com/resources/PlanarCam.zip

How to use:
Uncompress the files and merge the .max into your own MAX scene

How does these elements work? 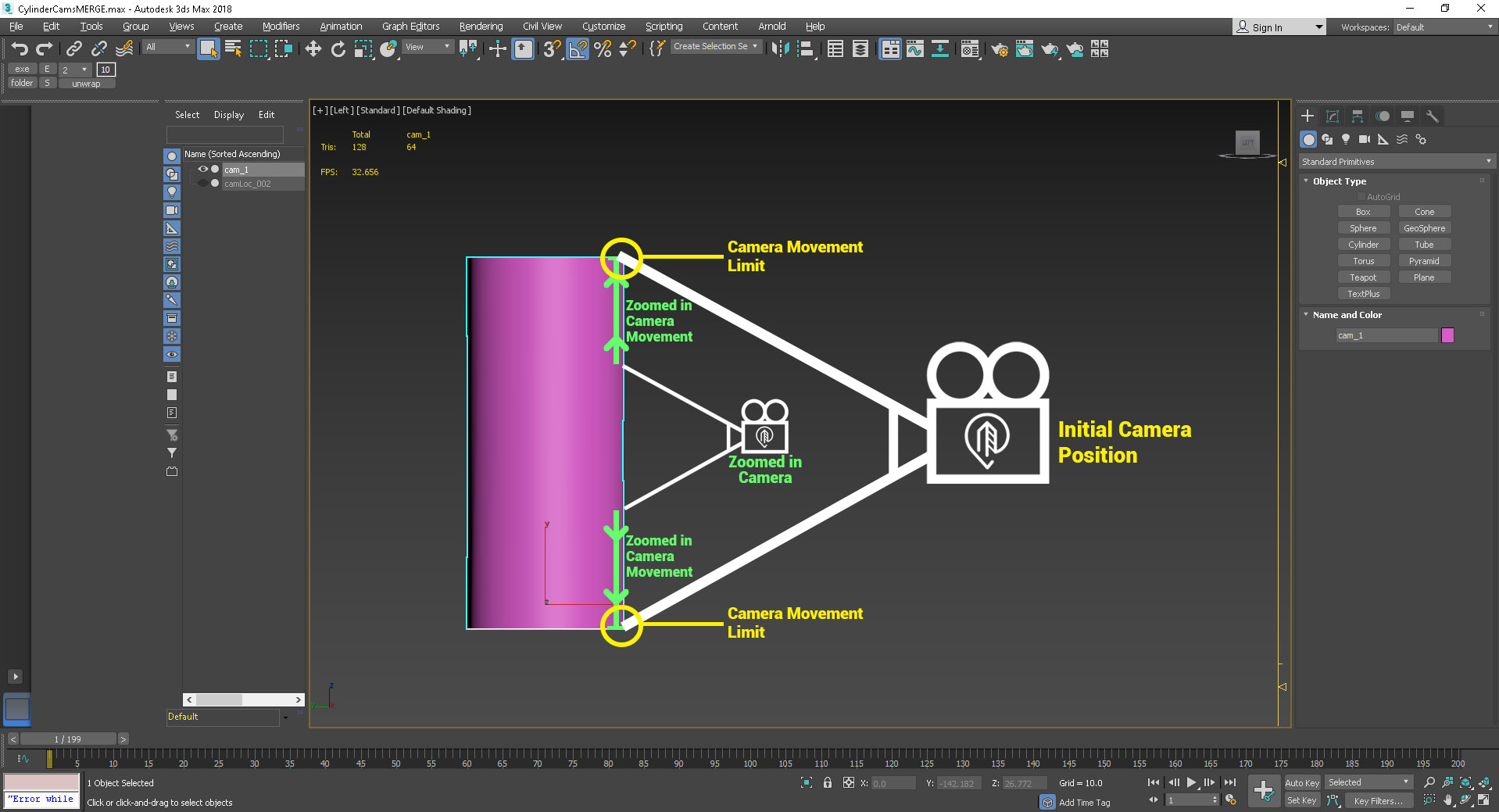 The cylinder will be used as references that will be later used for the real cam, it will use the vertical limits to define the frustum of the camera at the initial camera position and limit those frustums from going beyond when the camera is zoomed in
Now, in the SceneBlueprint we can find some interesting settings for how the camera will be controlled: 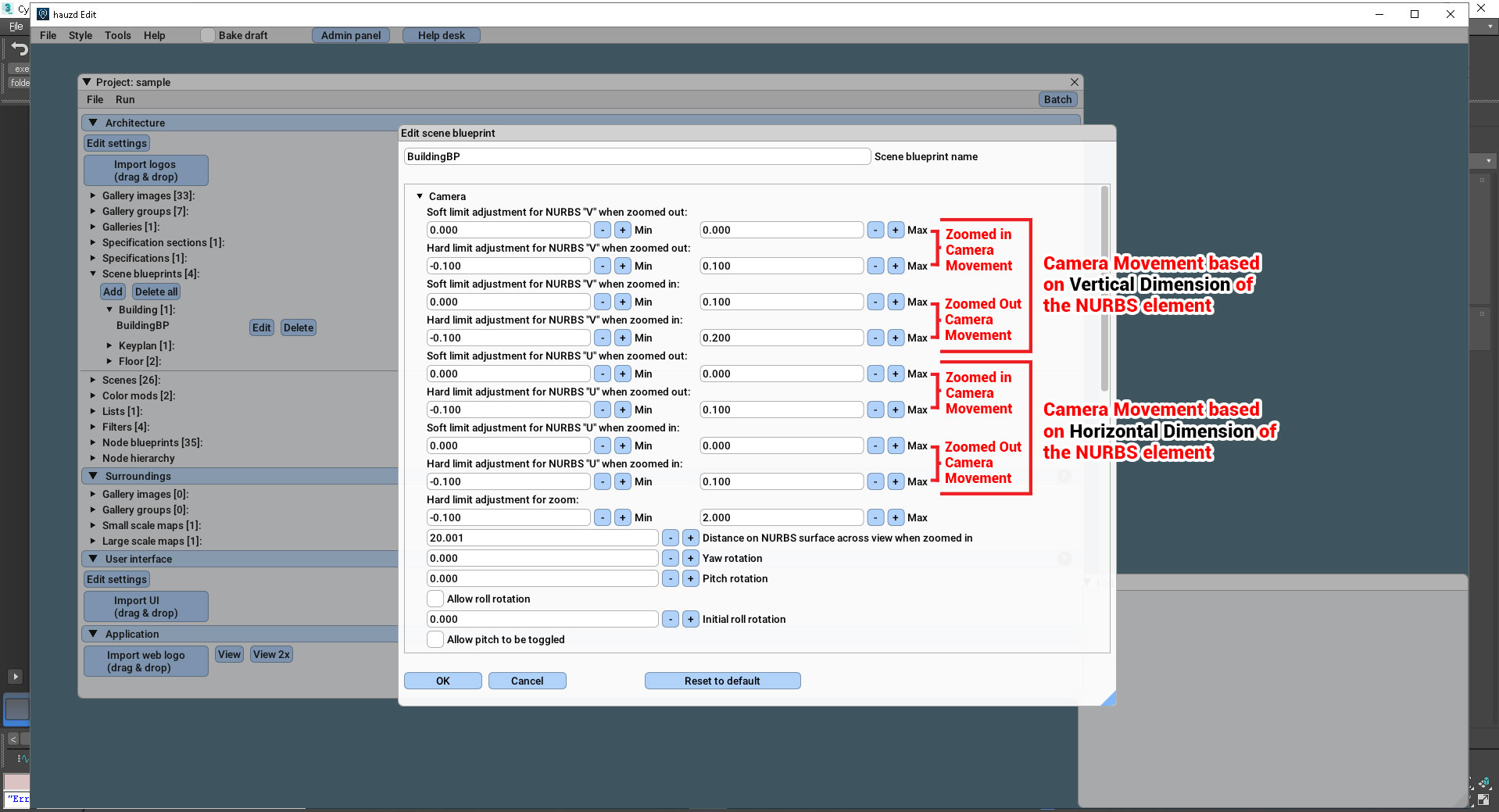 For Cylinder Camera , we can only control Vertical Movement since horizontal is infinite and seamless due to the shape itself of the cylinder
For Planar Camera we can use both Values
Now, this values will range from -1 to 1, we can consider a whole unit (0 to 1) is a whole full shape size, and we can make a mockup on 3ds Max using our shape to see clearly the range 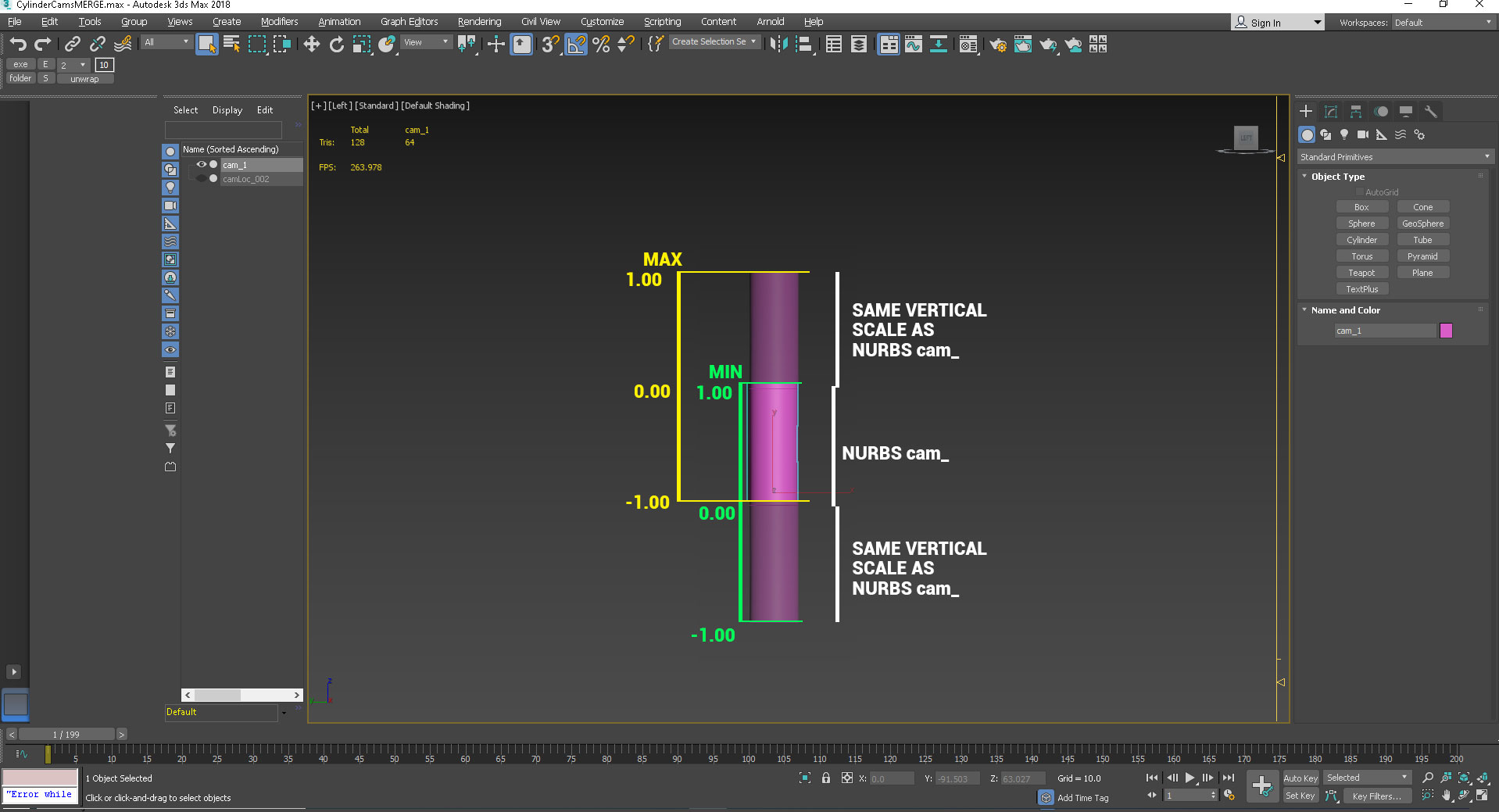 So, what is "Soft Limit" and "Hard Limit"?
The Soft Limit is the first limit of the camera, the one that stays when you are not clicking or not touching the screen
The Hard Limit is when you click or touch to "force" the camera to go up a little bit more beyond the maximum, then, after you release the click or touch, the camera goes softly back to the hard limit
Now understanding these 2 concepts, we can start tweaking values and start checking the results: 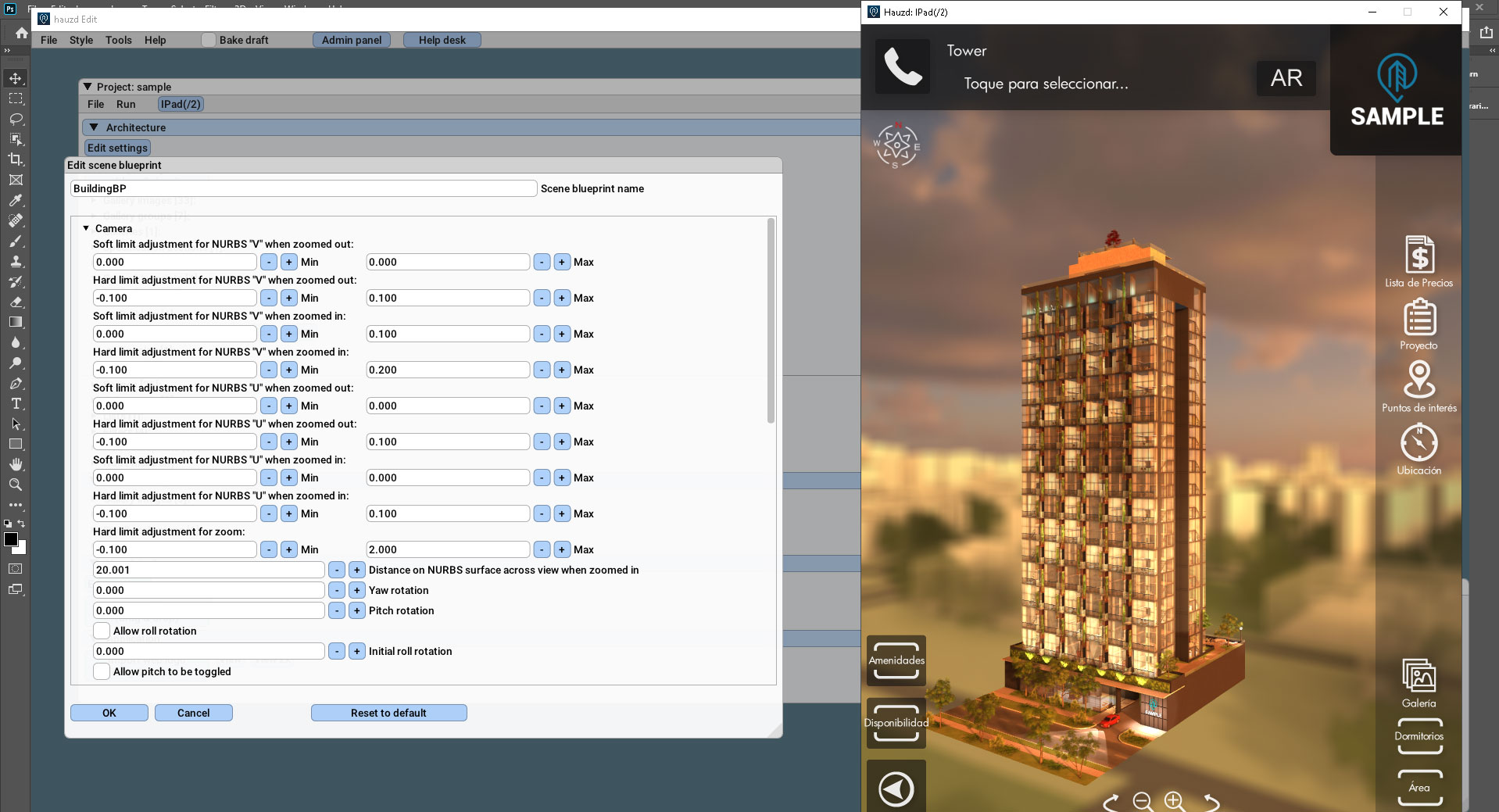 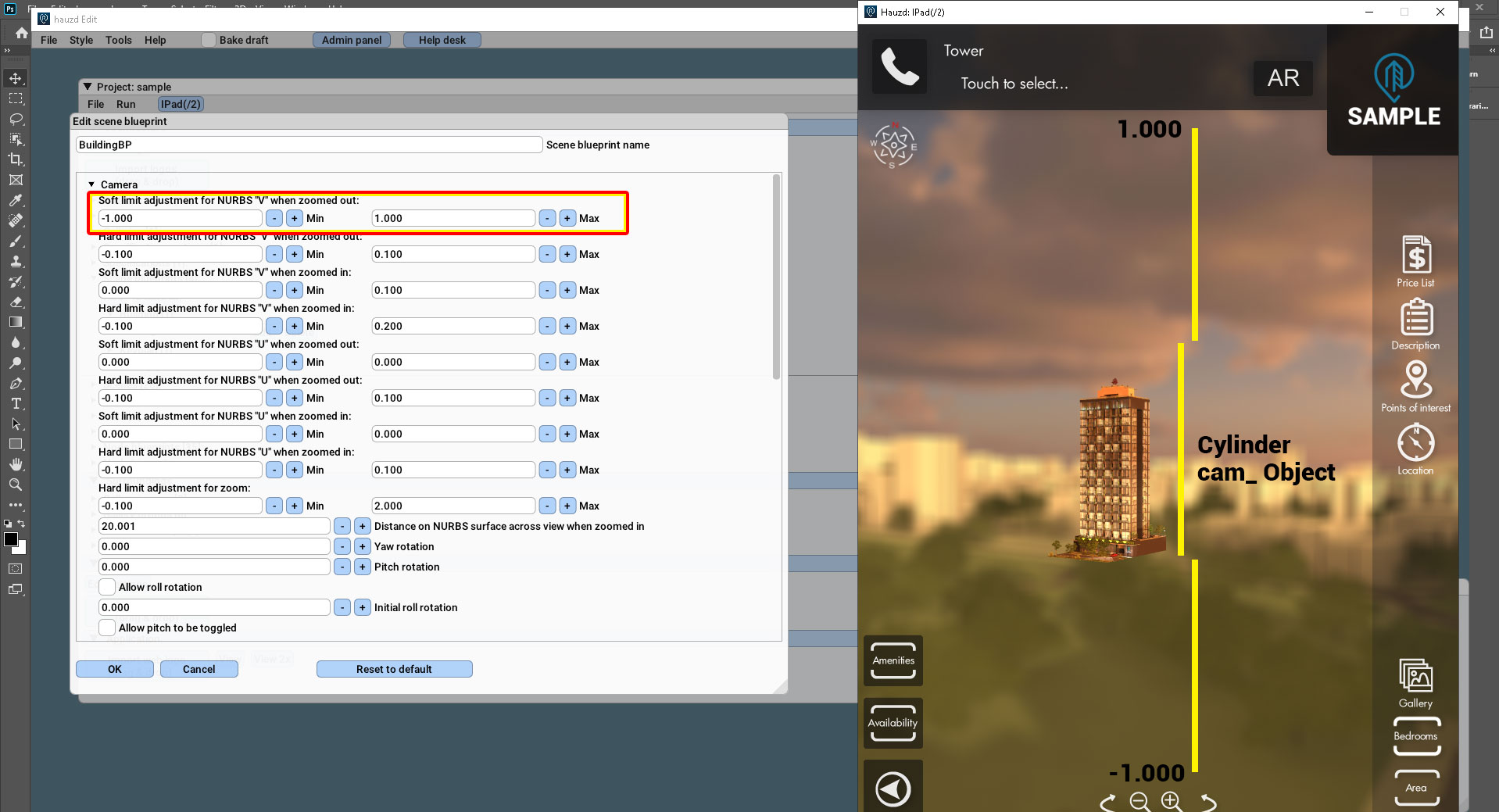 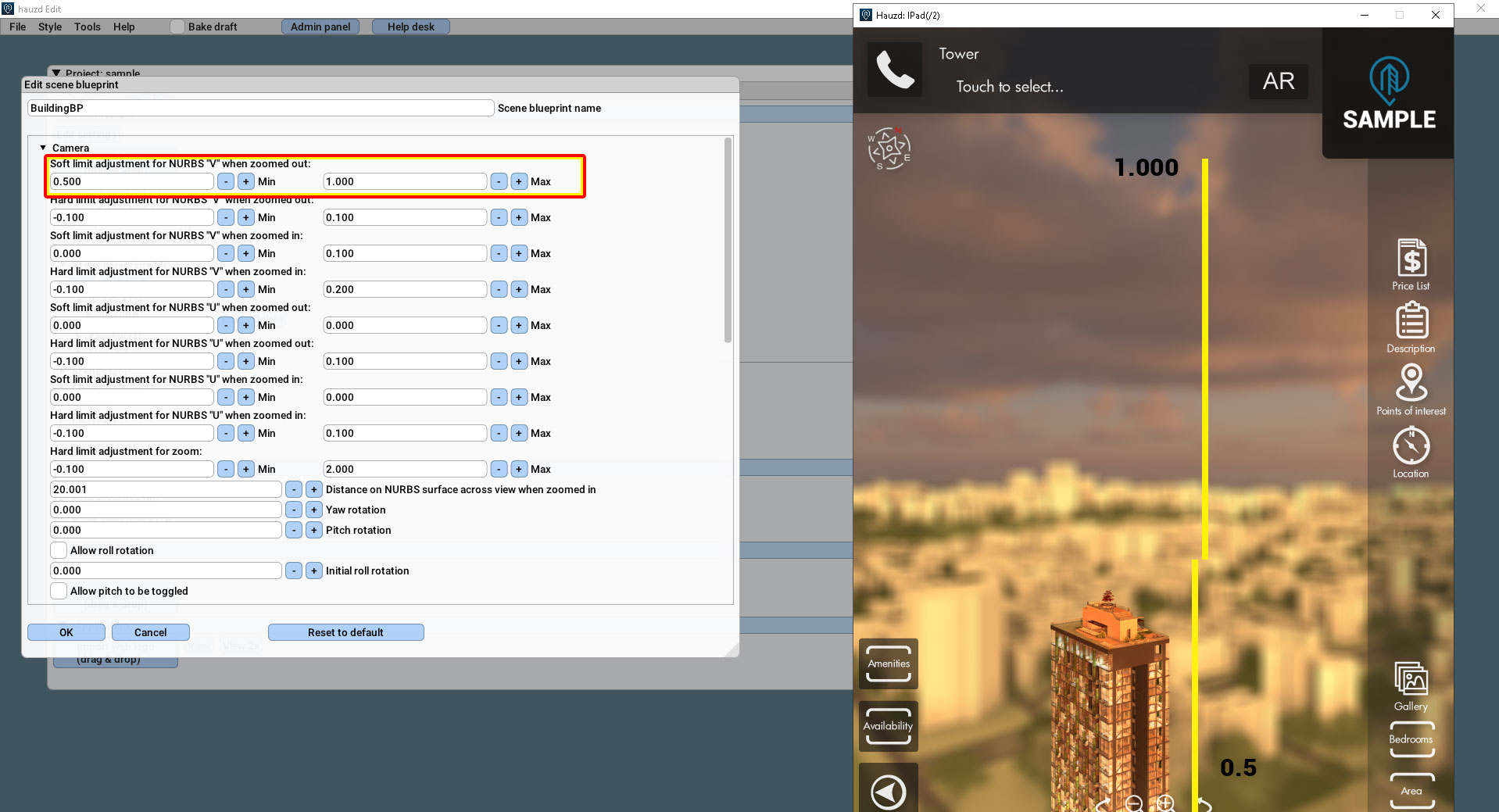 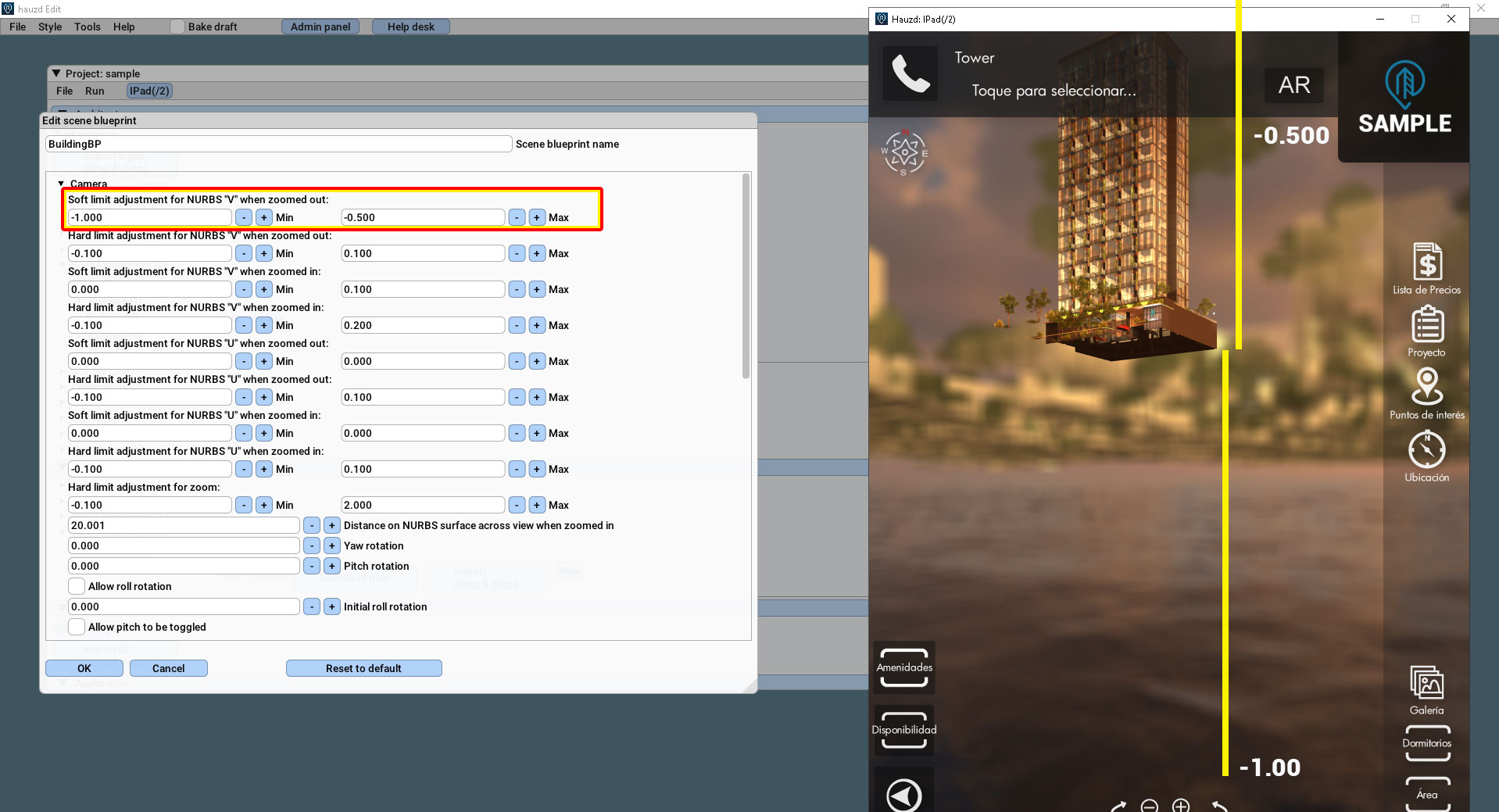 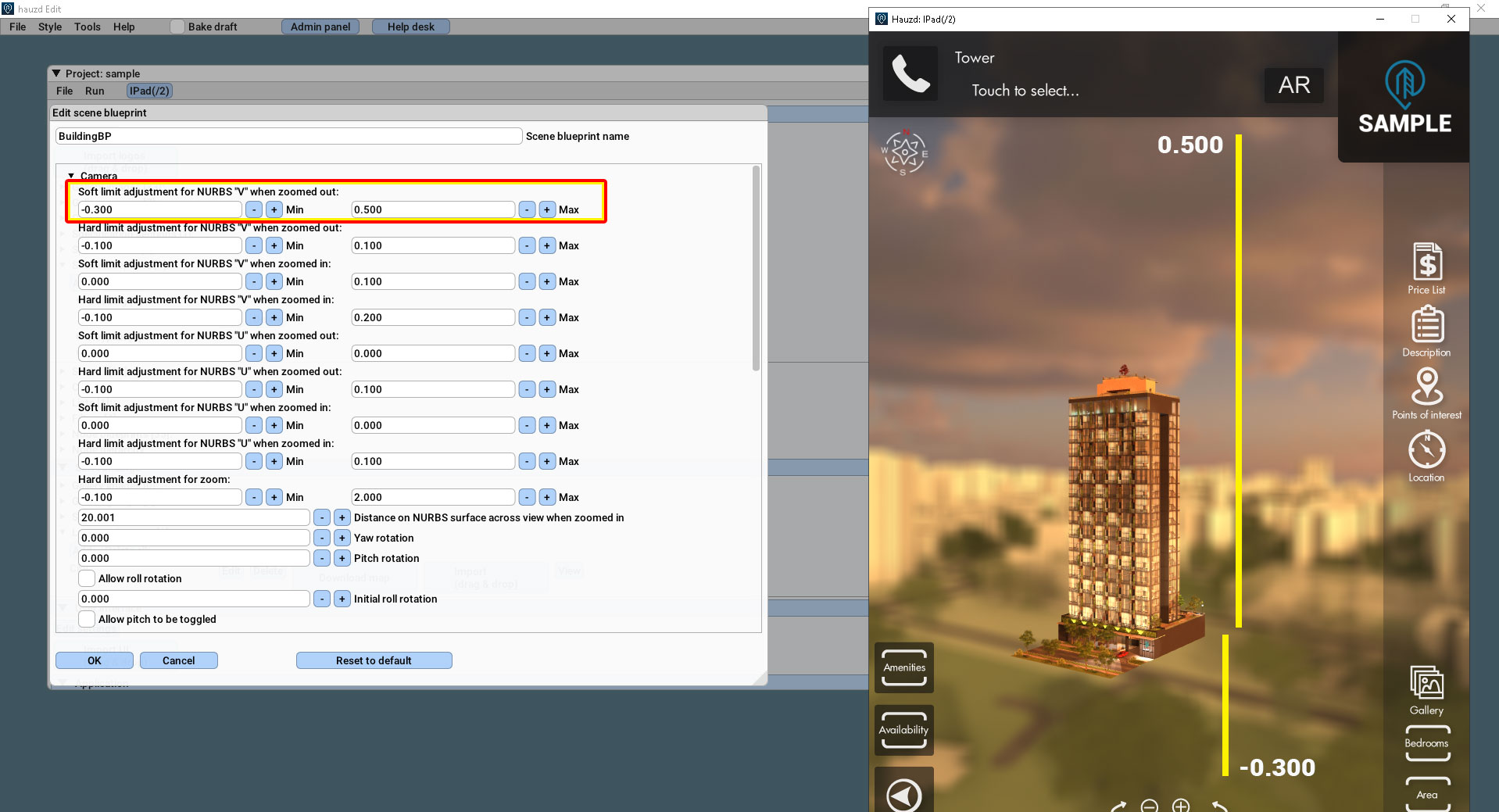 Now, you can do exactly the same with the zoom in Values, the camera will softly merge both limits from Zoom Out and Zoom in 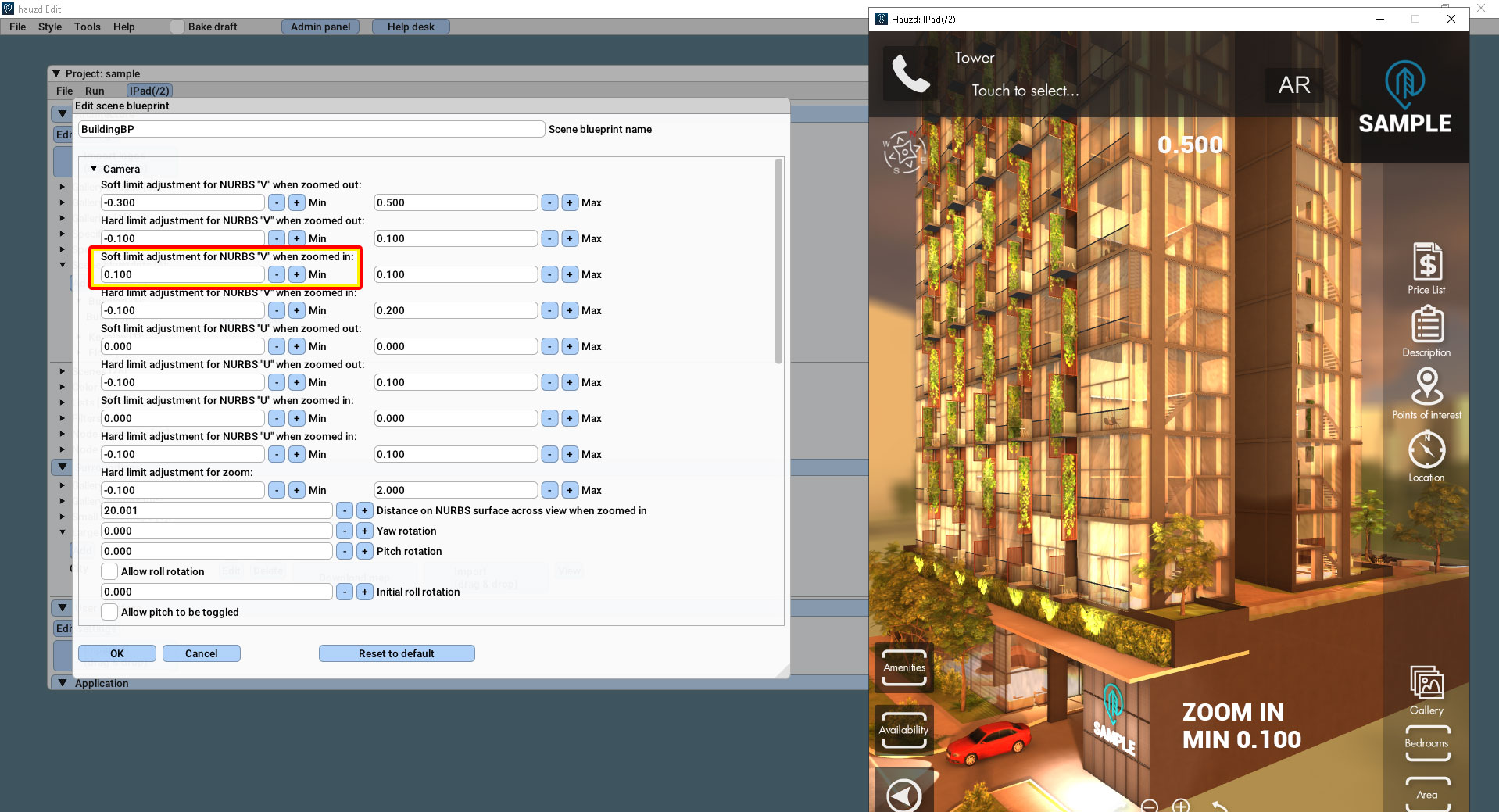 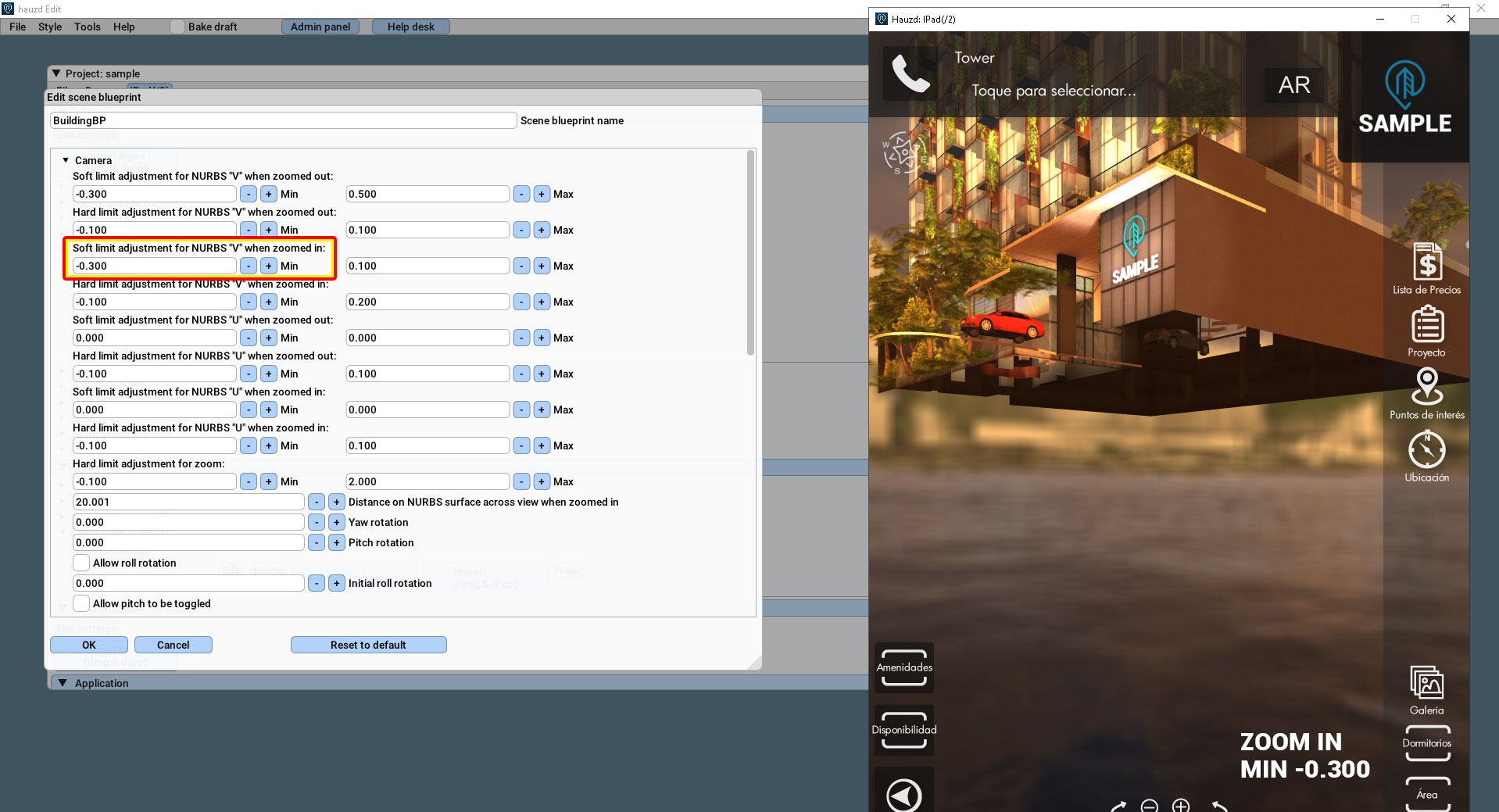 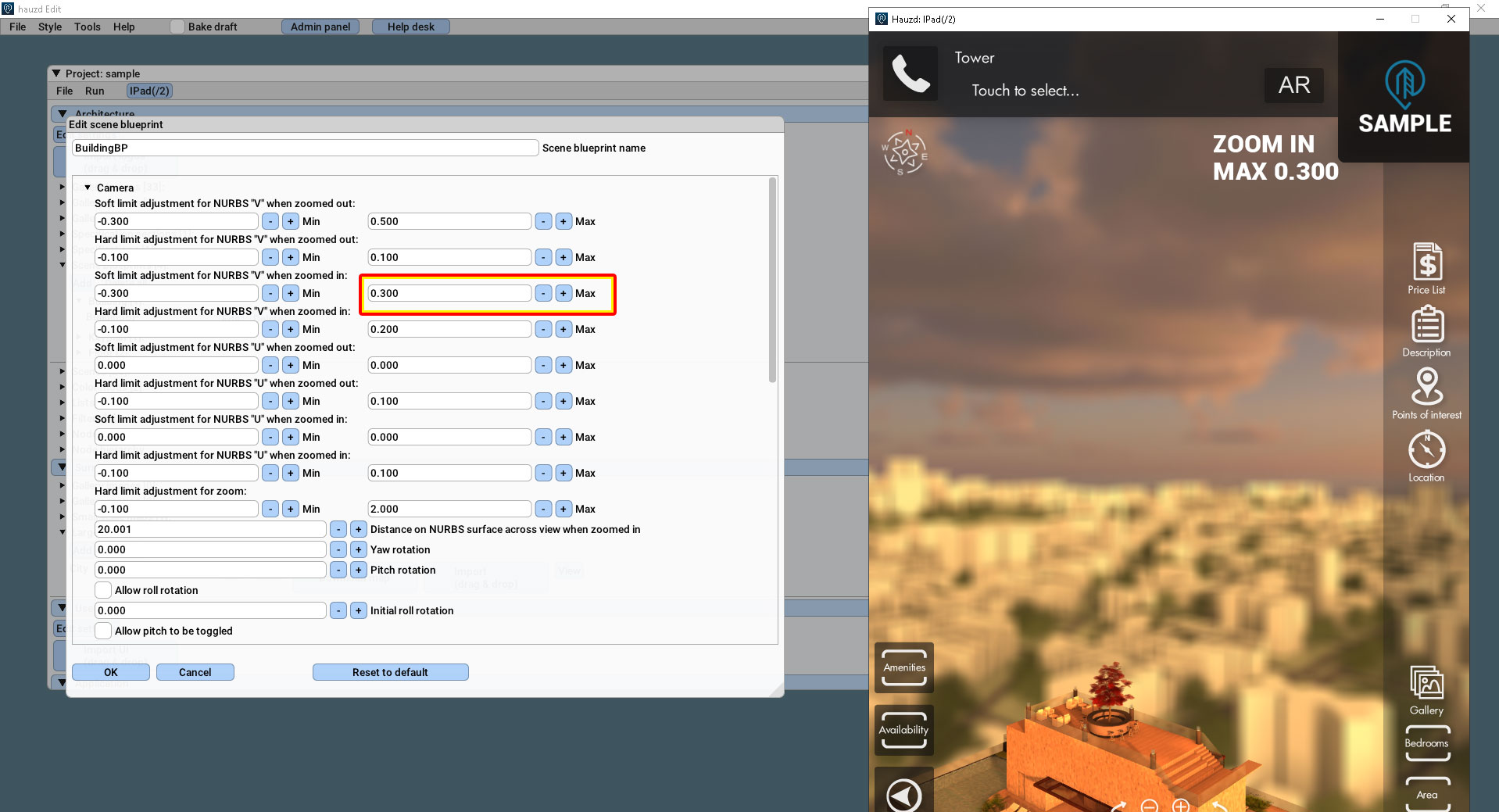 Planar cameras are a little bit more complicated to handle because it uses both dimension (V and U), this is how it looks like if we import the downloaded "Planar Camera" into the Building scene of Sample Project : 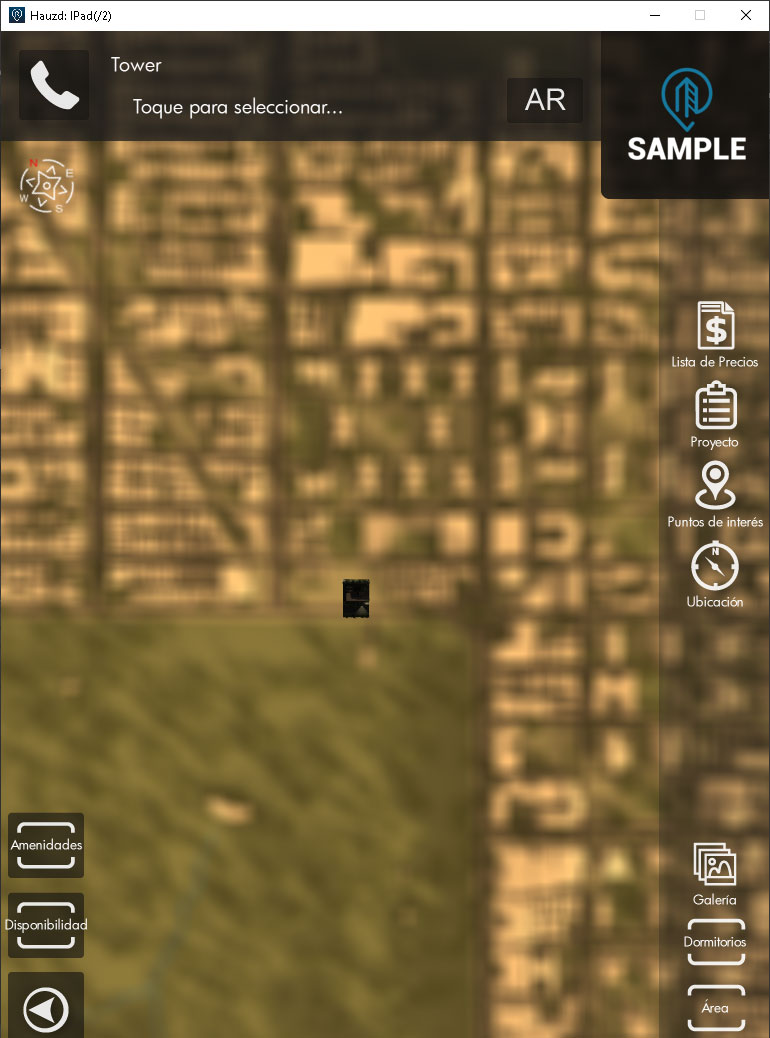 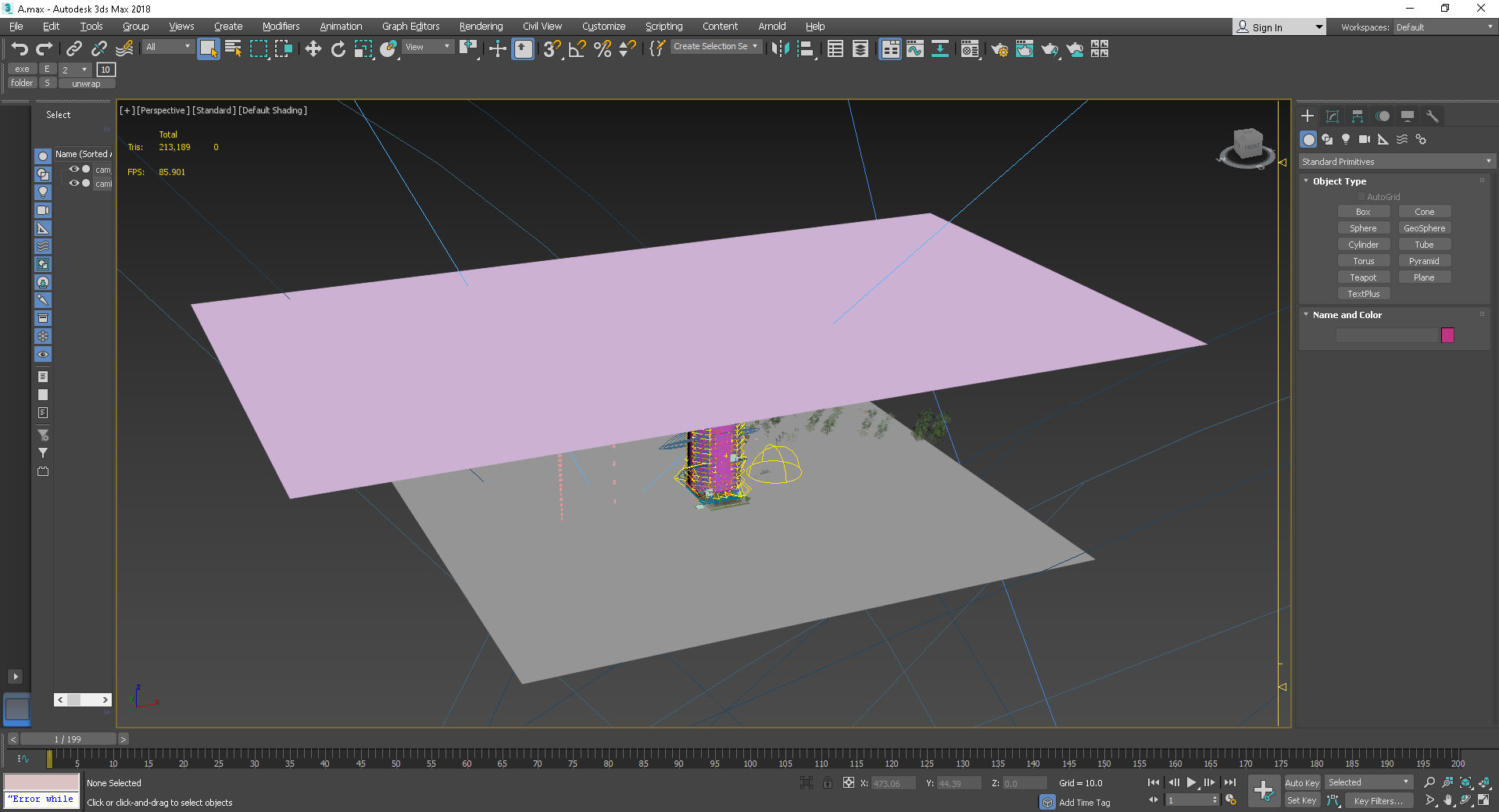 The easiest thing to do at this point is to SCALE the plane shape so we can get a closer view, based on what we already know, that the NURBS is used only as a reference for the camera position, scaling it down will bring the camera CLOSER to the building 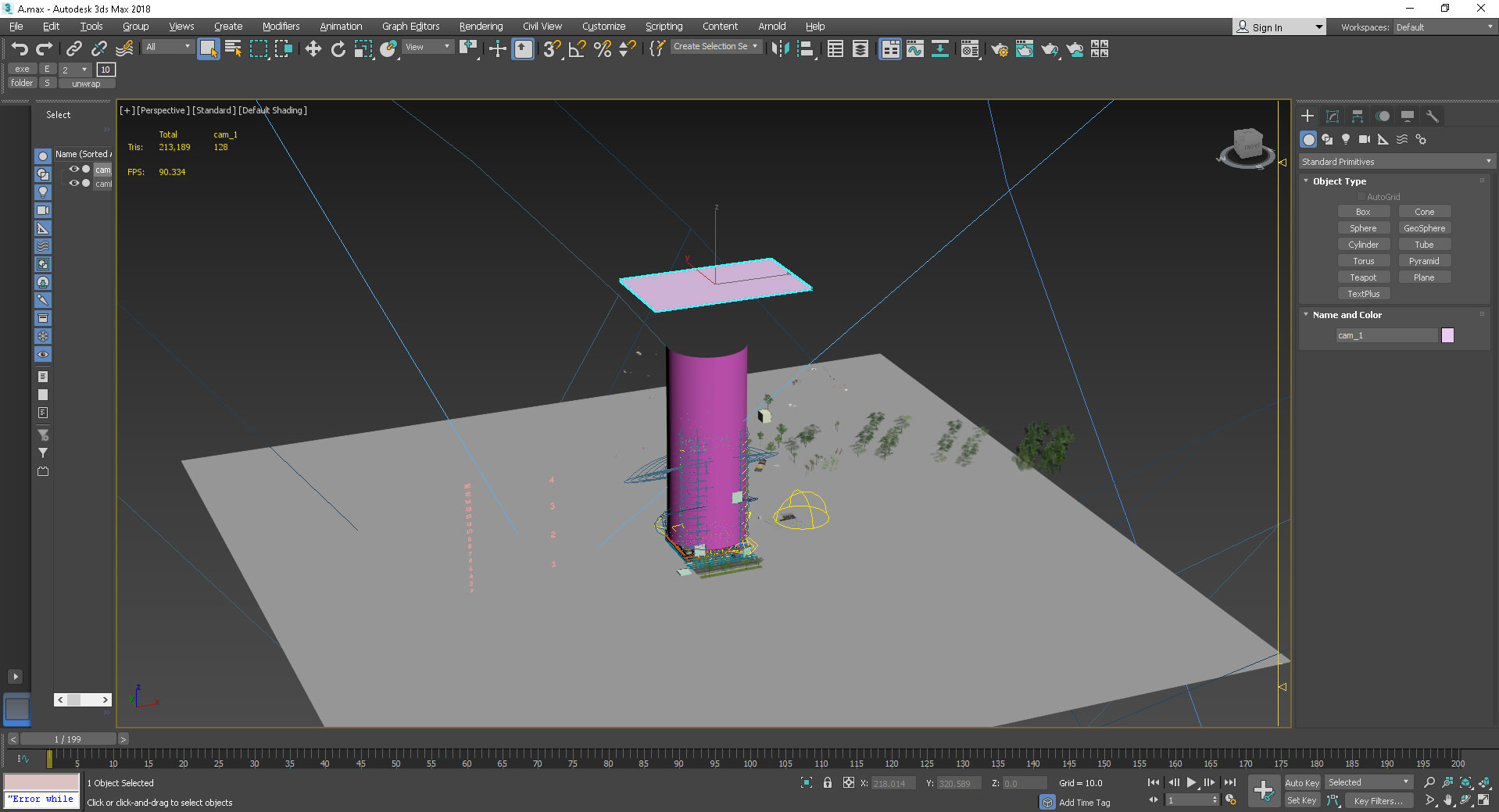 At this point, you don´t have to change or modify the vertical position (You don´t have to move up or down the camera elements), just change the scale
Now we do have a better and closer camera position 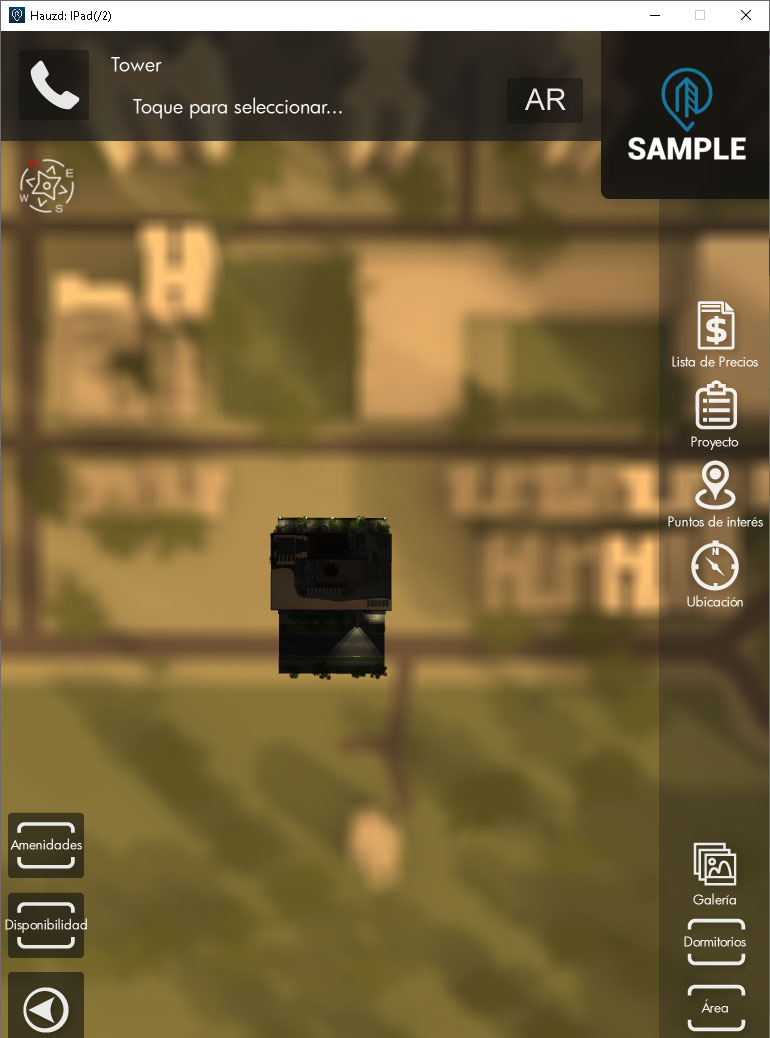 Once we place our camera correctly, we can start tweaking the limits if needed 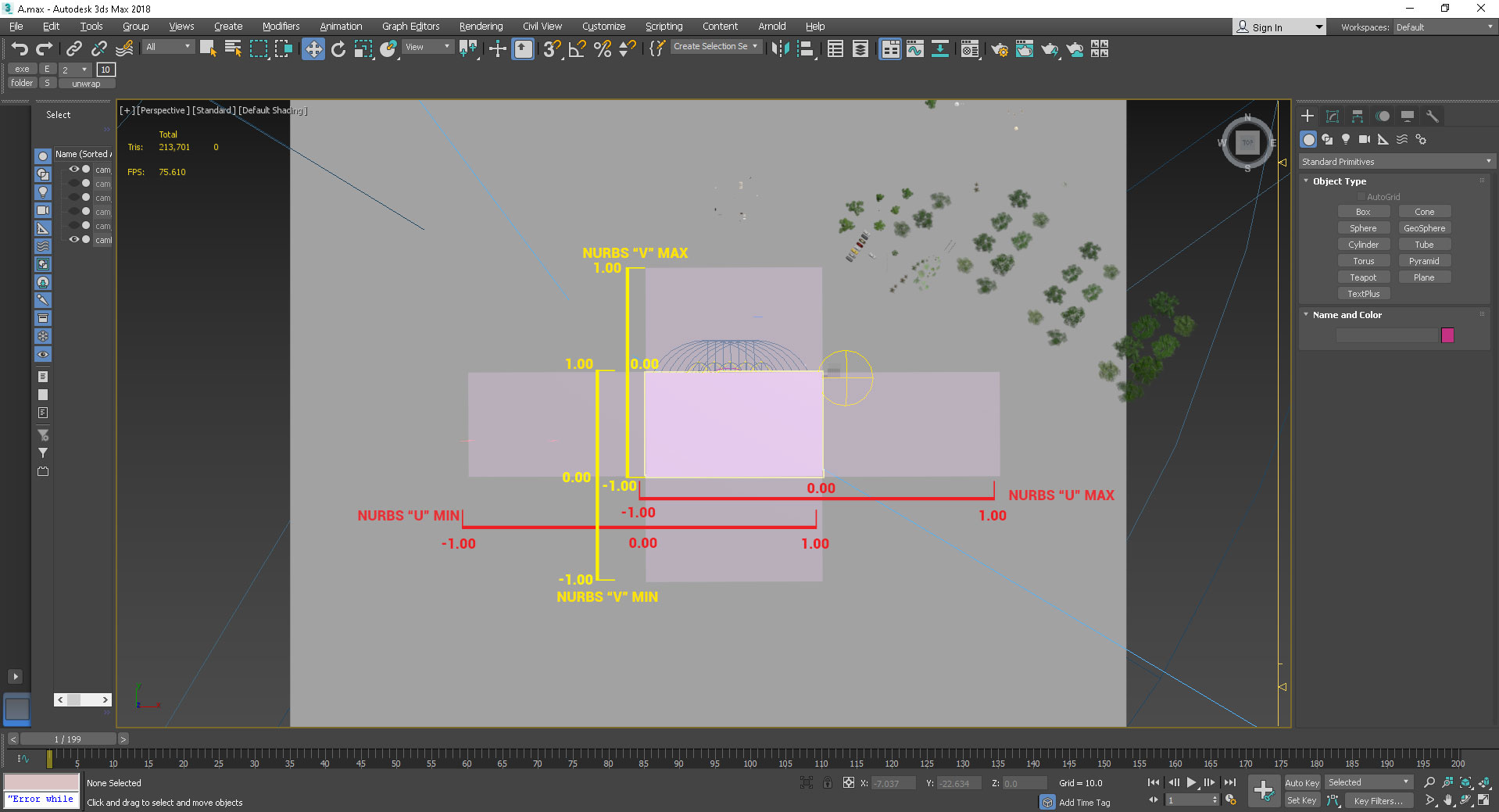 Now, we find other setups for the cameras: for the planar camera we can also use a Pitch Value so it looks more to the "front" and less "below" 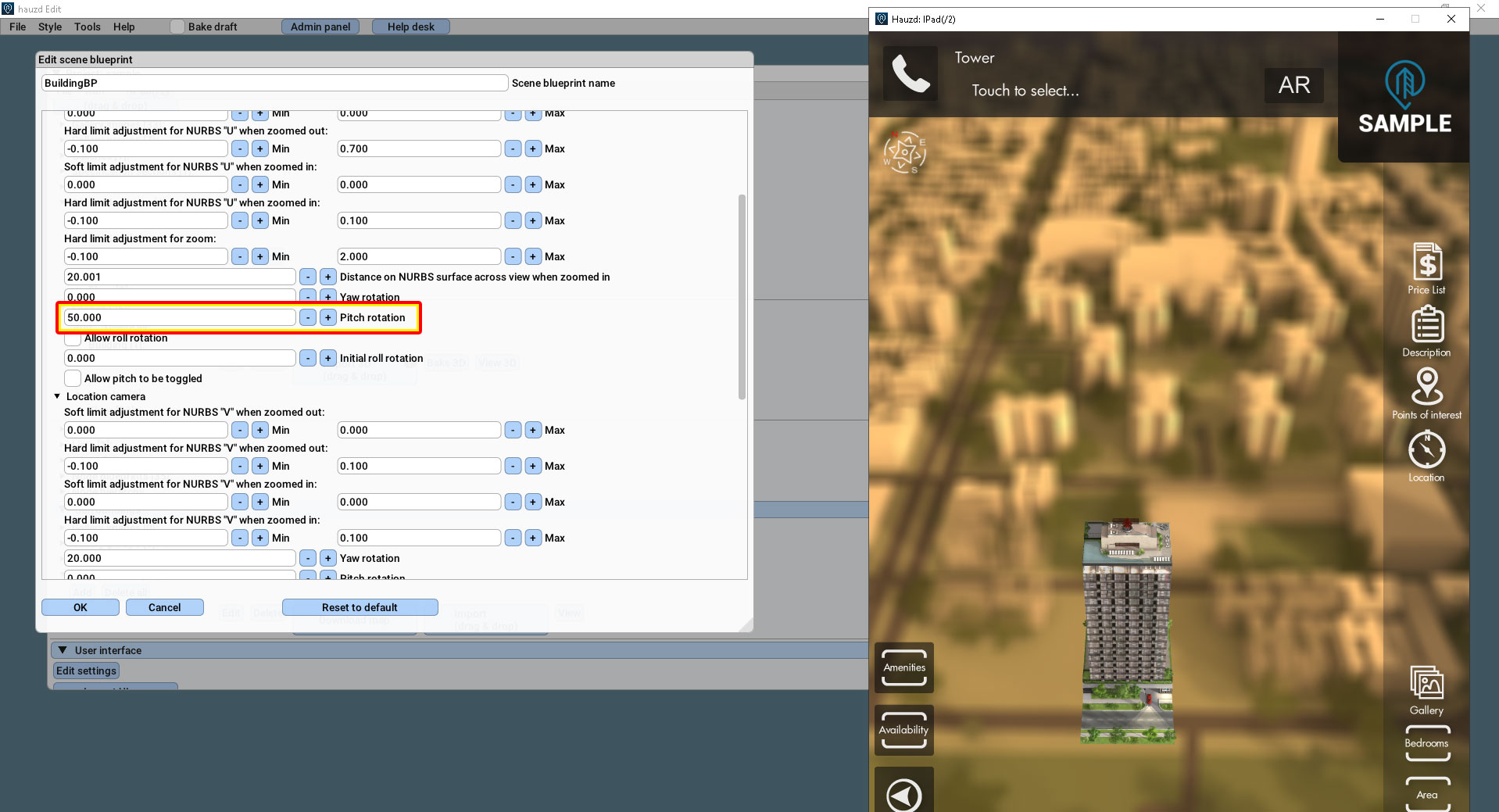 After a few other adjustments considering the limits, we could center more the camera 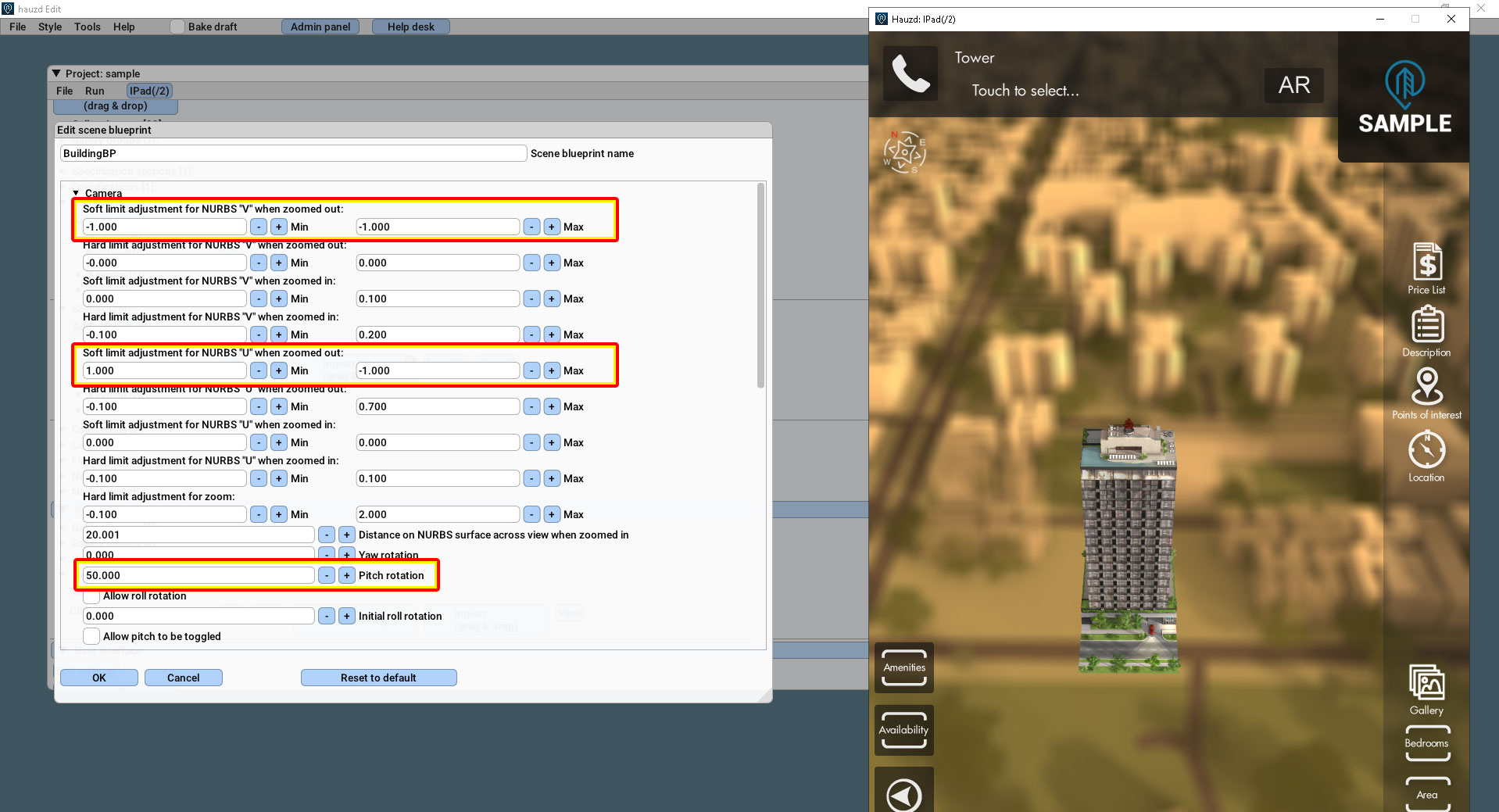 Keep in mind that this camera is not the best one for buildings Scenes since it makes hard to select the unit, we used a building on this tutorial only to show the basics of it.
We mostly recommend this camera on masterplan where you can see the whole construction site before entering to the building

We can also modify the amount of zoom of the camera using these 2 values: 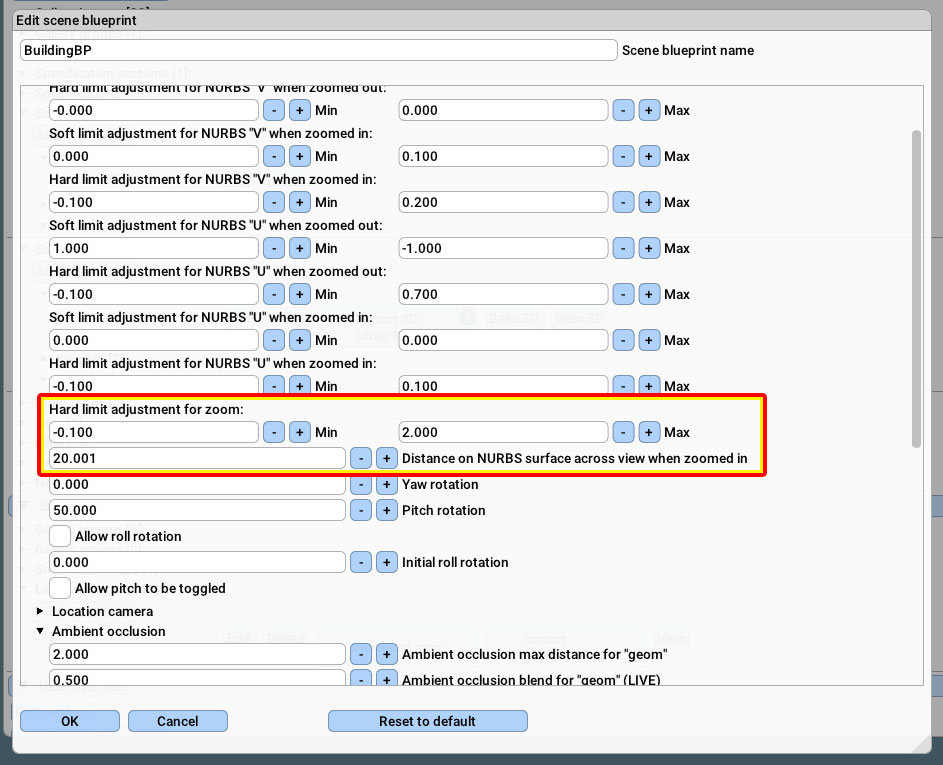 Hard Limit Adjustment for Zoom
Works similar as the other max adjustment, is the amount if zoom that the user can "Force" while having the interaction buttons pressed
Min is the zoom in Hard Limit and Max is the zoom out Hard Limit
Distance on NURBS surface across view when zoomed in
This can be considered as a "max zoom in", being the reference the NURBS cam_ Element, you will set at what distance IN METERS, the camera will stop from zooming, in the image, for example, the camera will stop zooming in when it reaches the distance 20meters from the NURBS
Yaw Rotation
Sets default camera rotation on Yaw Axis
Yaw Rotation
Sets default camera rotation on Pitch Axis
Allow Roll Rotation
Defines if the camera be rotated on the Roll Axis, this is also mostly useful on Planar Cameras, as you can see, by default, user can NOT rotate across the building.
In other words, the camera is fixed to see only the front of the building 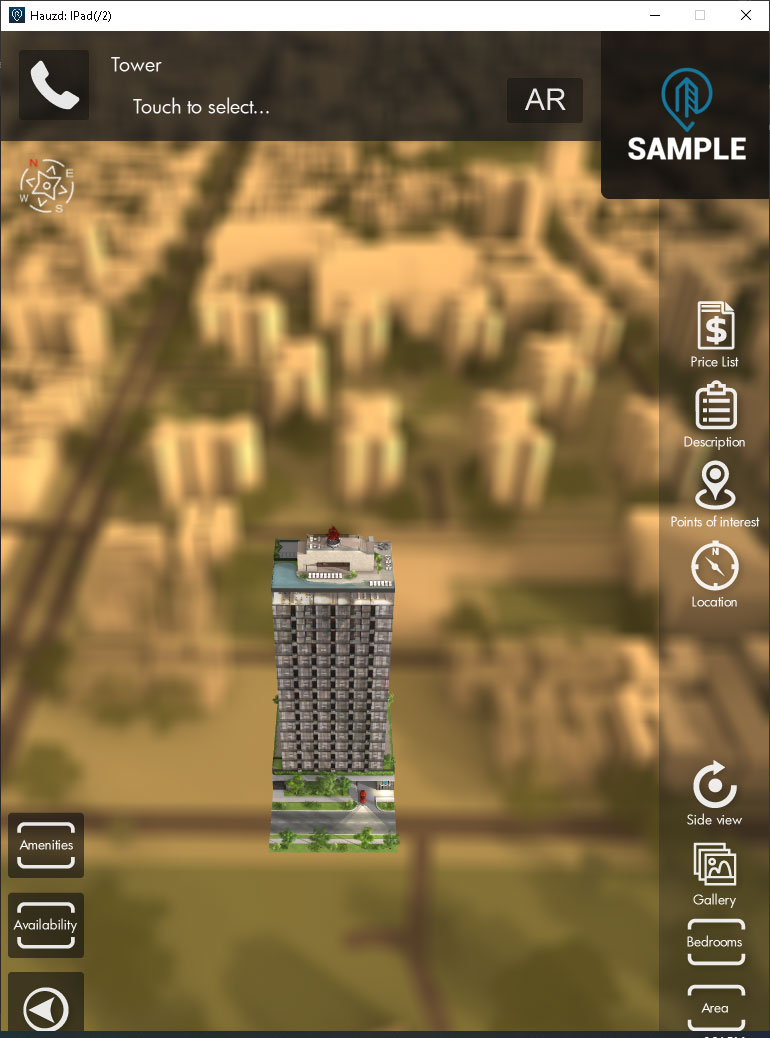 If the check is marked, user can now rotate and see the other faces of the building, the UI rotation handles will be also activated 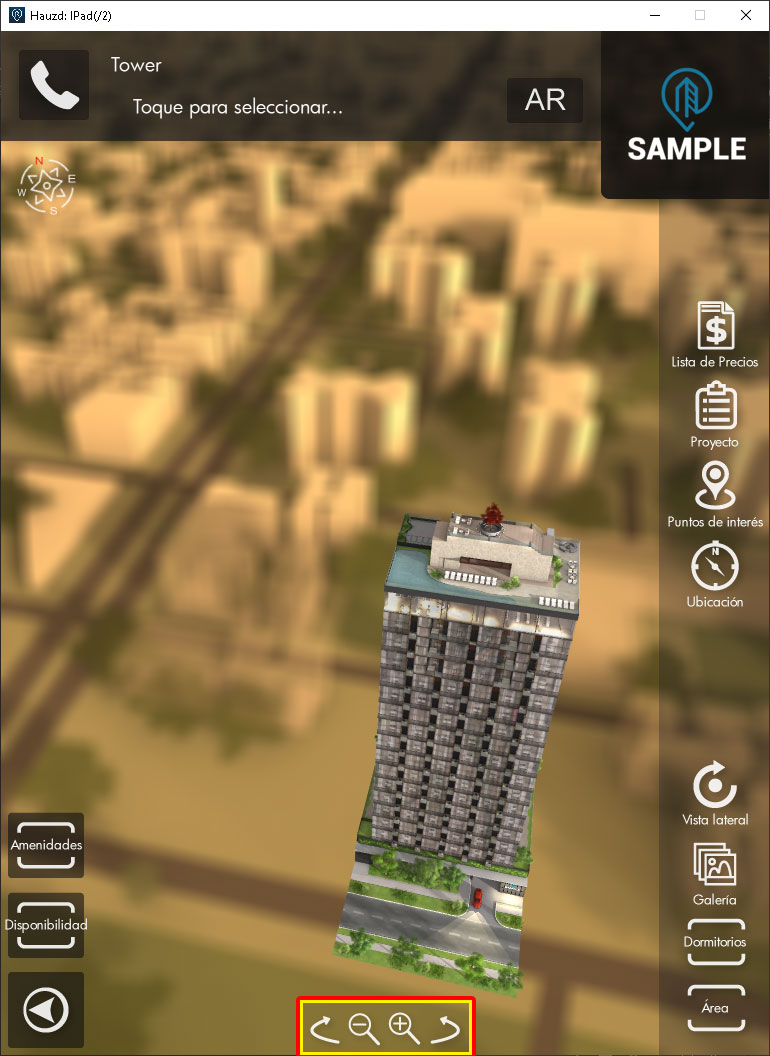 Initial Roll Rotation
This will be only enable is "allow Roll" is unchecked and sets default camera rotation on Roll Axis
Initial Pitch Rotation
This will enable a button that also triggers a second view based on another pitch Angle, for Example, if you have your pitch in 50 and allow Pitch toggle set in 70 (This is the maximum value), you will be able to switch both rotations by the use of this button: 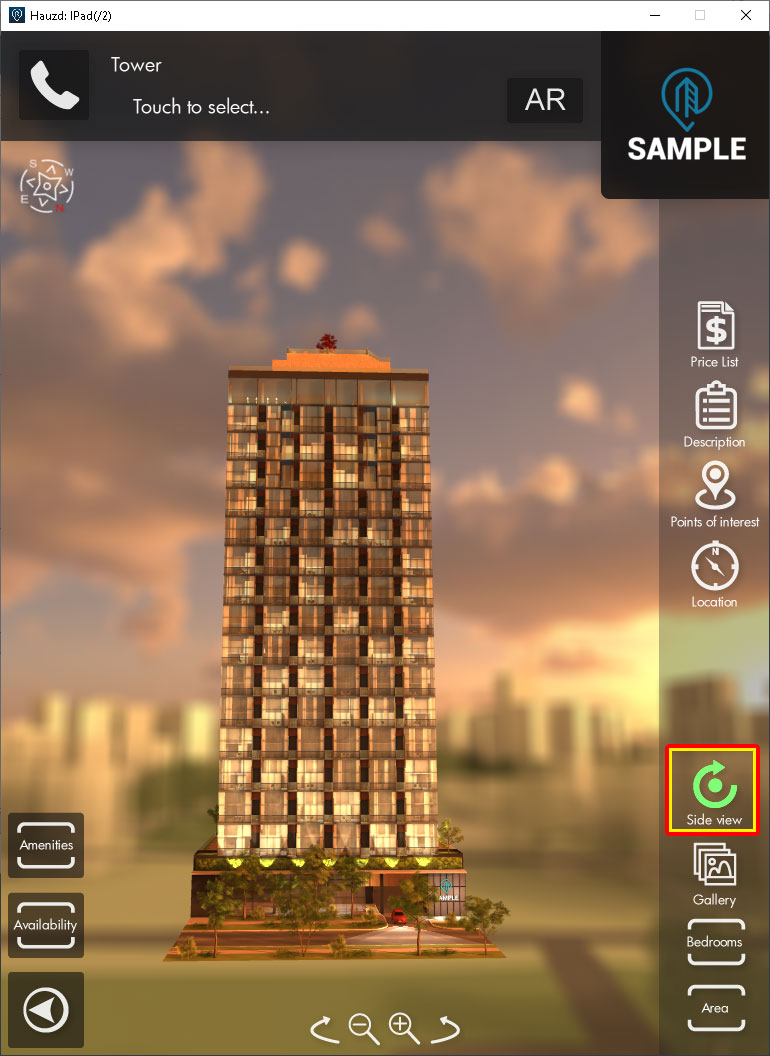 If we allow this Toggle, we can set the pitch angle when toggle AND a roll rotation to be activated with the same toggle!

After all the Camera Settings in the Scene Blueprint, we can also set some values for the camLoc_
We highly recommend to always use a cylinder camera for the camLoc since it will be the one that allow us to really see the surrounding Points of Interest (you can´t really see the horizon from an aerial camera view)
The settings and configuration options are basically the same and works with the same basis
The only "add on" to the Location camera is the Yaw Rotation Value of 20, this sets a nice offset to check clearly the POIs without the building in front of the camera 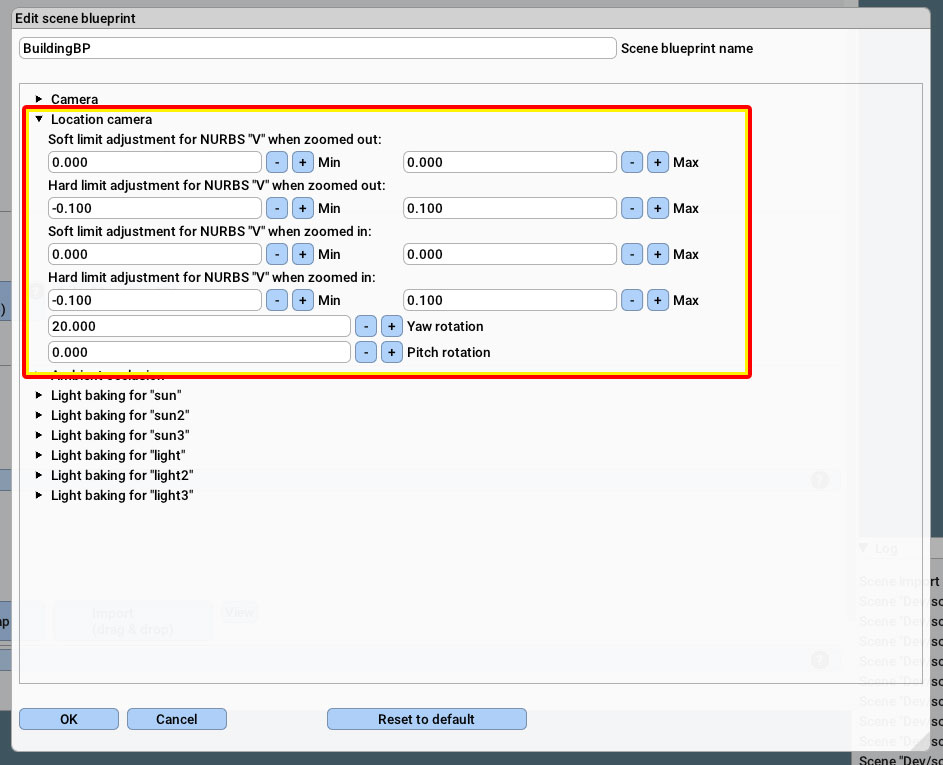 If you have any other question or doubts about the camera system, you can always post your own question on our forum and our agents will answer as soon as possible!